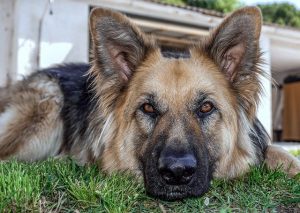 Poop is a funny thing. When you add a picky to poop German Shepherd to the mix, it gets even funnier. Why? Because if you’ve been around the breed for as long as I have, there is one thing you know with certainty, and it’s that they tend to be the pickiest of poopers.

It’s actually quite comical to watch if you’ve got the time. But if you don’t have the time, it can be a pain.

What’s going on here? Numerous times throughout our dog’s lives we’d be outside when they’d pop a squat to get ready to poop, only to change their minds and move to a totally different spot that must have been a far superior place to drop a deuce when compared to the first spot.

We’ve seen this in all of our German Shepherds. Maybe there are a few out there who don’t identify as a picky pooper, but ours have, and I suppose this begs the question:

Why is my German Shepherd so picky about where he poops?

There is actually a lot that goes into your German Shepherd’s decision in picking out where it poops ranging from aligning his body with a magnetic field, to marking his territory and communicating with other dogs, and sometimes just being picky about the turf itself.

For example, one of our German Shepherds will only poop on grass and will have nothing to do with cement or black top (while the other one has been known to drop some turds on our driveway).

The rest of this article will take a more in depth look at what makes a German Shepherd such a picky pooper, as well as a few tips to make it go faster when you’re in a hurry.

Why does he take so long to poop?

There are a lot of things going on when your dog is getting ready to do his business. A lot of this is stuff that you and I may not think about, but it can be frustrating when you’re in a hurry to get to work or because it’s -9 degrees out and you just want to get back inside.

One of the most basic reasons for this, is because of the following —

Some of what is going on is that your dog is sending messages to other dogs. I’ve witnessed this first hand when we brought our new puppy home several weeks back.

In fact, here she is just the day before I published this article:

We brought her home and had her pooping in the front yard from the moment she got there. This totally disrupted our older German Shepherd who also used that same front yard as her own bathroom since we’ve lived in this house for two years now.

This never happened before and I’ve never seen her go to a different, unsoiled spot to poop, but she did for a few weeks. I’m not sure what changed, but one day she started pooping in the front yard again. I think maybe she just realized that this new puppy isn’t going anywhere and is a part of our pack, now, for better or worse.

But the point, is that your German Shepherd is at least attempting to communicate with other dogs to let them know she lives there, among other things.

Other reasons your GSD takes forever to poop:

There are plenty of other reasons. Sometimes it seems like our girls just want to smell each and every individual blade of grass before doing their stuff.

What’s really going on here is that they’re looking for the perfect spot to go. In fact, recent studies have shown that dogs like to drop their stink nuggets off in such a way that their body is aligned with a magnetic field.

And maybe more believable, there is also the chance that your dog is looking for a safe spot to poop because they’re more vulnerable when they’re in that position. Your German Shepherd may circle around, or spin, a few different times to ensure that there aren’t any other predators around attempting an attack.

These are some of the more common reasons why your GSD takes forever to poop (but how do you make them poop faster?)

By the way, if you want to know how we potty trained our new pup so fast, read our article on the topic by clicking on that link.

How can you make your German Shepherd poop faster?

For example, one thing I like to do is announce why we’re going outside to begin with. I know that she knows she has to go potty, but I still like to remind her when I put the leash on as well as when I open the door.

And in fact, there are 3 different trigger words I use to remind her it’s time to go.

First, when I put the leash on and open the door, I say, let’s go outside and go potty. Every single time I take her. The kids and wife don’t always, but that’s okay because I do.

Then, as soon as I get to the grass I say, go pee pee.

Then after she does that we walk around the yard a bit, I say go poopy now.

Each time within a minute or two they do their stuff (unless they’re distracted by something they can’t get over, like the people doing the roof next door today.)

We did this with both of our current dogs, and with our last German Shepherd named Jumbo to some degree, even though he was an adult when we rescued him.

It has always worked for the most part and has helped to speed up the process.

How do you teach these trigger words?

It’s actually a fairly simple process that just takes a little time if you don’t already have trigger words. The most important thing is to say the trigger words whenever the dog is doing that thing that you want to trigger in the future.

For example, starting with go “pee pee” when she squats to go pee, say “pee pee” or whatever you want the trigger to be. Do this several different times across a few days until you get to the point where she starts to understand that her popping a squat to pee is what you’re after.

When she does it reward her. Same thing with the poop.

She will get it and be more willing to poop faster for you because you’re gently reminding her.

Pro tip – As a side note, I do this with all things. Talk to your dog and let them know what you want. You’ll be surprised to see how quickly they pick up on things. For example, whenever we go back inside, I say to her “inside.” That way, she associates that word with us going inside. Then, if I ever need her to go inside she already knows the trigger word.

And by the way, a trigger word is nothing more than a simple command.

Pro tip #2 – We also teach our dogs our names. This has come in handy on more than one occasion. I lay a story out on our page here about a time our older GSD (then 8-years old) jumped into action when I thought my son was being kidnapped. I told her to go get Andrew and she knew exactly what I needed her to do. She protected him.

Walking your GSD for poop:

This is one of the reasons why some dogs poop so much on walks. They just can’t help themselves because their bowels are in overdrive.

This gets the added benefit of giving her a little exercise, as well, but you don’t even need to walk far. A lot of the times, by the time I get to the end of my driveway we’ve got a pooper on our hands.

I mean, she didn’t poop on our hands, but you get my point.

But ultimately, they should help your dog poop faster, unless your dog just happens to be really picky.