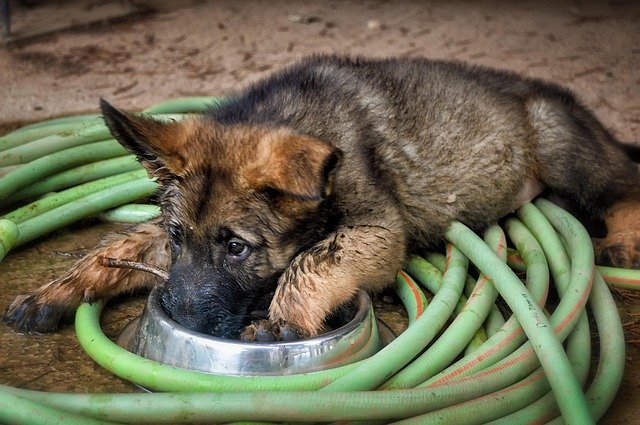 This is an exciting time, and I’d like to personally congratulate you on your newest addition, or soon to be new addition. I’d also like to say that bringing a German Shepherd puppy home is a big undertaking that requires some planning.

The goal with this blog post is to walk you through some what you might go through after bringing your new pup home for the first time, as well as giving you some pointers to make sure you’re as prepared as you can be going forward.

We’ll cover every aspect from the drive home, to what to do once you get home as well as how you can prepare your home, beforehand. Let’s get started.

How do I bring my German Shepherd home?

In the car, you can either use a portable animal carrier that’s big enough for the puppy, or hold the puppy on your lap with a small barrier between you and the puppy to keep you clean from any accidents that may occur. When you get home, walk your puppy around outside until he goes potty and reward him when he does. After you bring your puppy inside, limiting access to one room is a good idea until he gets used to the new environment.

We’ve potty trained more than one GSD puppy now and have the process pretty much nailed down.

The rest of this article will detail some of the other things you should know.

We learned this one the hard way. While we knew from our previous puppy that we should give a bath, we are in a different stage of life now and totally forgot. After not having fleas for several years, we brought fleas home with us from the breeder.

Not just a pain for us and the puppy, but also for our older, 10-year old GSD, as well, who has severe allergies to fleas. We had to go deep on this because we didn’t realize at first that the puppy had brought home fleas, and since the breeder washed the puppy right before we brought her home we thought we were in the clear.

The bottom line is that you have no idea what your puppy has going on when you bring her home for the first time. It’s a brand new dog. Even if you get her from a reputable breeder, nothing is off the table. We didn’t think we were going to get fleas, but we did.

Washing the puppy with a gentle flea wash is a good idea, especially since, depending on your pup’s age, she might not be ready for medicine to keep the nasty little bugs away just yet.

Washing the puppy even if she’s washed at the breeder is a good idea just because you don’t know what type of shampoo they’re using or if they’re using any at all. They handed us a wet dog. Who knows.

Pro Tip – Every GSD we’ve ever had wanted to kill moving water (like that which comes out of a hose or faucet). So, getting them used to being bathed at an early age is key. It may not sound like a big deal, but it will be if she misses and gets your hand instead of the hose.

We eventually used this stuff found on Amazon to get rid of the fleas on both the puppy (because she was old enough) and our adult GSD.

We were NOT prepared for the new puppy when we brought her home. In fact, I had to run out to the local store an hour before we left to buy puppy food and the rest of the stuff I knew we’d need, like baby gates.

Thankfully this isn’t my first rodeo as it’s our third GSD and have nearly two decades of experience with the breed.

A short list of other stuff you’ll need, is as follows:

Those are the bare minimum things you’ll need to get you started with your GSD puppy. Keep in mind that you’ll need to replace some of those things as time goes on.

Food and treats are obvious, but GSDs tend to be heavy chewers so any toys you get will only last so long. Your collar will also be outgrown, etc.

Pro tip – Baby gates tend to be cheaper than puppy gates, at least in my area. This is usually true because of the marketing done, even though they are the same type of item.

When you first bring your GSD pup home, you’ll want to limit the amount of access she has to the rest of the house. We actually recommend this for a couple of different reasons.

First, when you bring your new puppy home you want him to feel comfortable and safe. Introducing him to the entire house right away can be overwhelming, leading to some misbehavior and causing the puppy some unneeded stress.

Remember, this is her first time away from her family. Her mom and siblings will never be seen again and this is scary for her. Limiting her to one area she can get used to before bringing her to the rest of the house is a good idea.

Second, our house was not ready, to say the least, when we brought her home. We had Legos all over the place, shoes, slippers, extra grocery storage on the floor, and the list goes on. We needed to finish cleaning our mess up to make the environment safe for her to be in.

We definitely didn’t need her to be eating Legos and other toys that our son was leaving around the house.

When we brought our girl Mocha home, we limited her to one room for about a week and then brought her to other rooms as she got older. This limited the amount of trouble she could get into because we made the decision to get a puppy the day we got the puppy and were nowhere near ready for a puppy.

She still gets into stuff, however, and it is imperative that you keep an eye on your puppy until it’s a certain age.

How long do you leave a puppy in just one room? Well, that’s hard to say because it may be different for each pup. When she was starting to burst through the gate to try and follow us when we left, we took that as a signal that it was time.

Pro tip – This is going to sound obvious, because it is, but always make sure you pick up after yourself. We recently had the casualty of a Barbie Doll who became victim to our little Mocha because our daughter didn’t pick up after herself.

Having a crate ready for your German Shepherd when you bring him home is an excellent idea.

And in fact, I almost always recommend crate training a new puppy because it tends to make everyone’s life easier. There was a point in time when I thought crating a dog was mean, but I have since come to my senses and no longer feel that way.

The main reason why, is that it’s actually comforting to a dog to have a place she can go to have a safe space that mimics a den. Dogs are den animals, and this is especially true of German Shepherds.

This area will come to be known as “bed” and is an excellent addition to your home in that your new puppy will not want to go potty there. Dogs have a general instinct that dictates that they won’t go potty where they sleep, which is great for your sanity purposes.

I strongly recommend placing your new puppy in your crate starting the first night if at all possible and try to keep him nearby so you can hear when he cries to go out.

Why is your new German Shepherd puppy crying?

Chances are excellent that your newly brought home German Shepherd puppy is going to do a bit of crying the first few days you have her.

Sometimes this subsides quickly, other times it can take several days. This is actually normal behavior.

I’m sure you can understand why this is. You basically yanked her out of her home. This is probably the first time she’s ever been away from her mother and siblings. She doesn’t yet understand that this exciting new place is going to be her new home and she misses her old place.

In fact, our current puppy would walk over to the car we brought her home in and cry for a few days as she sniffed the tires and door where she sat in the vehicle.

She also woke up in the middle of the night quite often during the first week, and this is also completely normal. As stated in the previous sub heading, dogs generally won’t potty where they sleep unless they have no option, and young German Shepherd puppies, think 8-10 weeks, cannot hold their bladder for more than a few hours at a time.

So she’d cry because she doesn’t want to pee or poop where she sleeps. While annoying, this actually works out to your favor because when she cries and you take her out it teaches her that this is the right action for her to do when she has to go outside.

German Shepherds are very smart and pick up on things like this quickly.

Pro tip – It’s a good idea to take your puppy outside when she cries. These dogs are very smart and she will quickly associate the action of crying with you taking her outside to pee and this being a positive thing when you reinforce it with a reward. Do this whenever she’s awake or sleeping until she gets it.

It’s a good idea to have as much of your new puppy setup done before you ever even get home with him. That way you can take the necessary steps to ensure that you’re introducing him to your home and any pets you already have, the right way.

How do I rescue a German Shepherd.