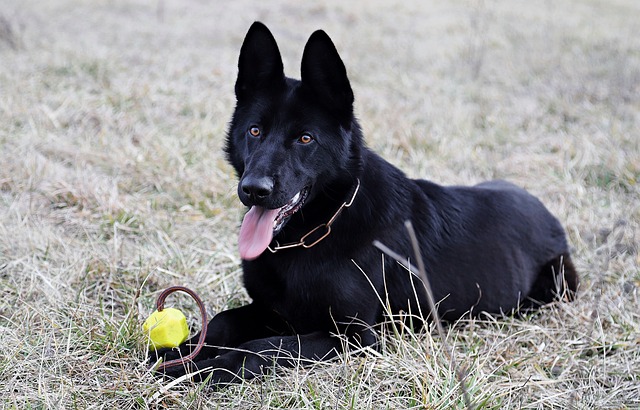 The Protective Pooch, the name of our little blog, exists only to discuss the German Shepherd Dog breed. And, we chose that name for a reason. These dogs are without a doubt, the best dog breed on the planet for certain tasks like being a guard dog and, at least to me, as the family pet.

GSDs are some of the most loyal dogs who are also loving and tend to be gentle with the family and children. Not only that, they are also intimidating and have earned quite the reputation from being the most popular breed of dog for working K9 and military units.

But this begs the question, then …

Yes, German Shepherds take to being a guard dog naturally and are more than capable of serving as guard dog and family pet. The reason why they can do both so well is because the German Shepherd is highly intelligent being one of the smartest and easiest to train dog breeds in existence. This intelligence, coupled with their loyalty, bark, and intimidating stature, really set them apart for the guard dog role.

What is a guard dog?

The next question that must be asked, is: What exactly is a guard dog? To some people the mind immediately travels to the junkyard dog, ever standing watch over the yard, protecting it from intruders and people who want to steal stuff. And while that rough image can certainly be true, that’s not what a guard dog is, to me.

To me, the guard dog is simply a family member who watches over the rest of the family and protects them from anyone who may try to break in to do harm, either deliberately with force or by accident because her presence is unmistakable.

But it doesn’t stop there. If I was on a walk with my dog and someone attempted to attack me I know she’d do her best to protect me.

It is just in their nature, and I’ve experienced it firsthand (in a story we’ll get to below).

Any dog can do this if they’re trained, but for the German Shepherd with a secondary duty of protecting sheep or other flock, it’s bred in. That ability is already there in most shepherds.

Training can enhance this, but I’ve experienced first hand what a German Shepherd guard dog is and my mind was blown.

I have first hand experience of my current adult GSD going into guard mode one day two years ago when I thought someone was trying to abduct my, then, six year old son.

To make a long story short, we had just moved into a new place in a new state and hadn’t yet met all of the neighbors. We were only here a few days, a week tops. I was sitting in my newly installed upstairs bedroom office, keeping an eye on my son playing in the cul-de-sac when a truck pulled up to where he was.

My heart sank, as I knew I wouldn’t be able to get to him in time and wasn’t even wearing shoes to run anyone down. But I wasn’t about to give up and let my son get stolen from right in front of me so I got up, bolted down the stairs, called the dog on the way, opened the door and yelled to her so there was no mistaking what I needed for her to do.

At the time she was 8 years old and not moving as well as she used to, but was still in incredible shape. I knew she could make it to my son before me if she listened, what with her four quick moving legs and all.

I was right. I told her, “Casey, go get Andrew now!!!” and she bolted up the hill towards my son and this strange man I didn’t know.

Sadly, I nearly gave the old man who lives across the street a heart attack, as he was just pulling up to tell my son to stay out of the street when he sees cars coming (as a side note, he was standing in the grass, not the street).

I still get chills thinking about it, and Casey still barks intensely at the poor old man across the street whenever she sees him. And, I’ve never seen an 80-something year old man with Parkinson’s get in a truck so fast.

I have absolutely zero doubt in my mind that she sensed my distress, knew my son’s name, could smell him and see him, and went to go protect him.

Would she have bitten him to protect my son had he not jumped into his truck so fast? I’ll never know, but it certainly wasn’t needed.

She’s a hero in my mind.

Why are German Shepherds the best guard dogs?

There are several key traits that German Shepherds have making them ideal protectors and family pets.

This should be no surprise. We’ve spoken about this at length in other articles about what makes this breed of dog so great. The first thing that comes to everyone’s mind is that they’re so very smart. And they are smart.

As far as dogs go, they pick up things very quickly and can learn new commands with ease.

There are other smart breeds, in fact this list numbers them all and breaks them down into different tiers.

The German Shepherd is #3 in terms of smartness and is in tier 1. This is something that I’ve known for a long time, because my mom had a standard poodle and she always laughed when she told me that her dog was smarter than mine.

I can say that if her dog was smarter, it was only by a marginal amount.

That list says a poodle is #2, by the way. And, first on the list is the border collie.

But because they pick things up with ease and learn quickly, they’re that much easier to get trained and get them to do what you need them to do, in terms of guard dog doody, er, duty.

As far as dogs go, the German Shepherd is highly adaptive to different situations, which makes them excellent guard dogs for the family and the business.

I’ve noticed with my dogs (and I’ve currently got two GSDs) that they can adjust to what I need on the fly, which is also one of the reasons why they’re the preferred breed for K9 police teams and military.

Because they’re highly adaptive, they are actually excellent at handling stressful situations. While the Yorkshire Terrier I had as a kid would shiver at the sound of thunder, the German Shepherd is utterly fearless and able to do anything it’s trained to do, and even some things it’s not trained to do.

For example, I never trained Casey to protect my son, that came naturally.

German Shepherds are strong and intimidating —

As if you didn’t know this already because maybe your head was stuck under a rock, the GSD is a strong animal that can be extremely intimidating.

I mean, that’s why my poor old neighbor jumped into his truck like he was a track star. He saw my big girl coming at him like a freight train in full gallop, nearly soiled himself, and the rest is history.

It doesn’t take long to come across a TV show or YT channel showcasing the devastating power behind the German Shepherd with speed, agility, and enough bite strength to snap human bones like they’re pencils.

And, just the fact that these dogs are intimidating is enough to keep criminals at bay. The dog makes your house and family a harder target in a neighborhood of softer targets without dogs, or with little ankle biters who pose no threat beyond the noise.

They don’t look at their human family members as other dogs, but they do feel a close connection with their people and have much love for us. That loyalty and love creates a desire to intervene whenever there is trouble.

That loyalty and love is what drives the guard dog, to begin with.

And of course, they also tend to have the strong desire to please their masters.

But of course, this will never be true of all GSDs, hence the following disclaimer.

I’d feel remiss if I didn’t at least briefly say that not all German Shepherds will react in a guarding way if you’re confronted and they have no training. And, even if they are protective of you without training they may not react the way you want.

While one German Shepherd might show its teeth to a perceived threat, another may sit back and watch to see what happens. Another entirely different shepherd may pounce on an attacker to protect you.

Any dog who isn’t trained will react differently to a threat, just as much as one dog may not want his ears touched, but another one is totally fine with it. They’re all different with differing personalities.

That being said, just having the German Shepherd with its long list of accomplishments and excellent reputation is enough to deter a bad guy. If a bad guy looking to do you harm glances in your window and sees a big German Shepherd sitting there, is he willing to take the chance that this dog will bite him?

Even if he doesn’t bite the bad guy, will he bark to alert people that he’s there?

Chances are excellent that, unless the bad guy knows you’ve got something worth chancing it, he’ll move on.

How can you train your German Shepherd to protect you?

One thing you can do almost immediately and from the comfort of your own home is teach your dog to bark on command.

While this may not help you out much if you’re not there, you should have your dog trained to bark on command should that dreaded time ever come.

Reason being, if there is one thing that no criminal wants to hear it’s the deep, energetic bark from a big dog. It just says don’t mess with me or my family.

Plus, if you can show an attacker that you’ve got more control over your dog than the average dog owner does, he may be less inclined to mess with you.

After you’ve gotten the dog to bark on command, as well as quieting down on command, the next logical step is to have him barking at the sight of strangers.

This article is getting long, so I’ll put together another resource on this.

Are German Shepherds Good Guard Dogs? In a word, yes.

In more words, they’re possibly the best tamed guard dog there is due to their loyalty, intelligence, agility, strength, intimidation, and willingness to please.

But these dogs aren’t for everyone. I explain some of the reasons why maybe a GSD may not be a good fit for you, in this article.